Legacy of Ss. Cyril and Methodius 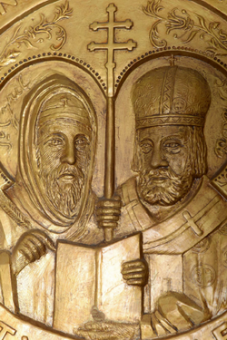 The unification of the Moravian and Nitra principalities heralded an exceptional era in our national history, together with the foundation of the first body politic in our region, the Great Moravian Empire. The beginnings of our statehood are tied with the princes Pribina, Mojmír and Rastislav. It was namely Prince Rastislav who distinguished himself in the construction of the sovereign state, the principal goal of which was to overcome the excessive influence of the Kingdom of the Franks in our region. With an aim to gain independence by building his own church organisation and to rely in his demanding vision on an alliance with a powerful country, Rastislav corresponded with the Byzantine emperor Michael III, asking him to send scholars who would teach the Christian faith in the Slavic language. Wishing to establish not only a religious but also a political union with ambitious Rastislav, the Byzantine emperor granted Great Moravia’s request and entrusted the fulfilment of this mission to the learned Constantine and his brother Methodius, both of whom already had experience in diplomatic service, possessed extensive educations and, above all, knew a language similar to the Slavic variant used in our region, which they had probably learnt from their mother. The knowledge of Old Slavonic was the fundamental prerequisite for their fulfilment of this difficult task, which Constantine promised to do even before departing. Through the creation of a set of alphabetic characters – the Glagolitic script – for recording the Old Slavonic language, through the translation of the Bible and other religious books, the basis was laid for the promotion of the Old Slavonic language to the level of the three liturgical languages: Hebrew, Latin, and Greek. With the establishment of an independent Slavic ecclesiastical province headed by Methodius, the foundation of a school, the enlisting of pupils and fostering the Slavonic language and letters, the aim of the Byzantine mission’s legacy was gradually fulfilled.

After the death of Constantine, who had adopted the name Cyril upon entry to a Greek monastery, his brother Methodius continued their mission. The Pope’s approval of the liturgy in a Slavonic language and the establishment of the Great Moravian ecclesiastical province headed by Methodius in the role of archbishop was not appreciated by the German clergy, who had managed to form an alliance with Prince Svätopluk. Having followed Rastislav as the ruler of Great Moravia, Svätopluk gradually satisfied his political ambitions through the invasion of other territories. For several decades Great Moravia became a powerful independent state uniting almost all the Western Slavs.

The heritage of Great Moravia thus encompasses both the spirit of the tradition of King Svätopluk and the Cyrilo-Methodian cultural legacy, later divided into the Orthodox and Catholic branches. The fundamental works of the Moravian-Pannonian letters, the Glagolitic script, its subsequent adaptation to Cyrillic script, and the Old Slavonic ecclesiastical language were the basic attributes of the cultural tradition founded by the Thessaloniki Brothers. The work of Ss. Cyril and Methodius, due to political and authoritative reasons, could not develop further in its original environment of Great Moravia and Pannonia. Instead it found a firm base with the Slavs of the Balkans – in the Bulgarian Preslav and in the city of Ochrid in what is today Macedonia, that is, in the territory of the Eastern and Southern Slavs. Later, the influence of Ss.

Cyril and Methodius would also take root among the Croatians, Romanians, and Ruthenians in the Kingdom of Hungary. The bearer of the Cyrilo-Methodian religious teachings and cultural legacy was the environment of the monasteries, which actively fostered the Glagolitic script and the Old Slavonic as the language of worship. In our region, the Cyrilo-Methodian tradition experienced a new surge of interest in the seventeenth century in relation to the study of archival documents pertaining to the most ancient history of the Slovaks, with an emphasis on the cultural and spiritual significance of the Cyrilo-Methodian mission. This was increasingly emphasised in the following periods and became the cornerstone of the construction of Slovak national awareness and identity. The cultural and spiritual dimension of the Cyrilo-Methodian mission left its traces throughout the Slavic world. Its linguistic wealth, reflecting our ancestors’ everyday life, acquired a tangible form by way of the recording of speech through letters. This fact may be perceived as the most remarkable in the cultural development of our region. The unique social impact of the extensive spiritual and cultural work of the Thessaloniki Brothers resonates to this day in the worshipping of Ss. Cyril and Methodius as co-patrons of Europe.

Our university, bearing their names, may thus proudly follow and develop the cultural legacy of Great Moravia, which is still directly connected with our territory today and plays an irreplaceable role, especially in the academic environment.